This was my last ultra of the season, and going in to this one, I have to say I was a bit concerned about my form. It has been a long season for me, starting with the Blackfoot Ultra 100km in May, then Sinister 7 in August, a bit of a low point late August at Iron Legs 50 miler, then quite the break until the North Face 50 miler December 3. It's been tricky getting in long runs with the weather, darker evenings, and really just losing motivation to keep running through November when the XC skip trails are opening up!


So going in to this, I was pretty certain I hadn't put in enough long runs, and I was quite worried about my ability to get through 80km and 10,000ft of climbing in the Marin headlands.

I had 4 aims going into this one:

1. Hang with the front group for the first 1-2 km (it was a stacked field, the who's who of North American Ultra running). My son told me to kick Geoff Roes ass in a text as I was leaving! Mmmm, no fear of that!

4. Catch my wife, who was starting the 50km race 2 hours after me. We figured if I had a great race, and she had an Ok race, I may catch her in the final mile or two.

For starters I'll say, this was an incredible race, on amazing trails, unbelievable scenery, warm conditions, great post race beer tent, and very well organized. If you are looking for a challenging 50 miler in December, this has to be it. And it's a sea level race!!! When you train year round at 6000, this is a total winner, and I was really hoping that the thick air would get me through this one!

The downside was the early start - up at 2:20am to get a taxi from Downtown San Francisco to the shuttle over the Golden Gate bridge, for the 5am start. Still, an early start means an early finish. Why doesn't the Sinister 7 start at 5am?

The race started, as expected, at a ridiculous pace, being cheered out by Dean Karnazes - pretty cool.

We headed out at 4 min/km by headlamp. Yes, I hung with Roes, Wardian, Wolfe, Jones et al for about 1.5km. Hal Koerner passed me at about 1km. Goal number 1, check.

I settled into a steady pace, feeling surprisingly good, sitting in behind top female runner, Krissy Moehl. She kicked my butt in the end, by more than I care to mention, but I was with her for the first 20 miles. The start in the dark was hectic, and as the field spread out on the first long climb, I had to keep a good look out for the flagging tape marking turns. Still, by daylight, and 2 hours in, I'd covered the first 21km and was feeling great. I had decided to go with 1 water bottle, and drink only water between aids. In the past I've had stomach issues and nausea with sports drinks, and the water strategy seemed to work all the way to the finish. Aid stations were every 5 miles or so, so I figured out I could fuel up and drink calories at aid stations.

As the sun came up the true beauty of the trails became evident with incredible vistas across the headlands to the Pacific Ocean. The trails were never too technical, but continuously up and down and interesting. At about 18 miles we were out on the final single track out and back, and the lead guys and girls started passing us on their way back in. The pace looked incredible, and it was cool to run so close to the big guns.

By mile 25 I was feeling great, though the endless steps on Dipsea were fatiguing the quads somewhat. I had hooked up with an accountant from New York, Ben, and we pretty much ran the rest of the race together. Ben was descending quicker than I was, but I seemed to catch and pass him on every climb, so we were well matched, and the conversation was good. 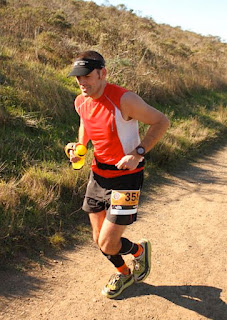 By the final 10 miles, with a couple go big climbs still ahead of me, I was still feeling incredible for this late stage in a 50 miler, and I began looking ahead for my wife, Saira, in amongst the 50km and marathoners we were now passing on the way back in. She was wearing pink CEP sleeves so should have been easy to spot. Heck, where is she I thought. As it turned out she was enjoying the sea level oxygen saturations as much as I was! 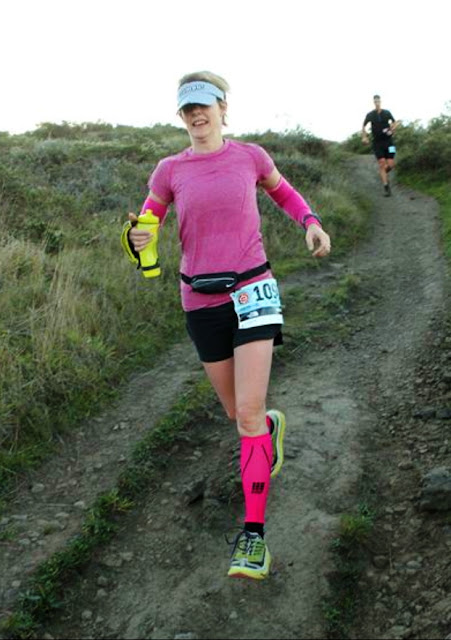 So I cranked the last few miles to the finish as best I could. 8h 42 final time, and my best ultra by far. No nausea, cramps or foot issues.

Thanks to The North Face for such a cool race. Thanks to the weather gods for being kind. Thanks to Ben for the chit chat miles 20-50, and thanks to Grandpa Rutter for watching the kids whilst we were off galavanting in the sunshine!