I had a go at the Canmore Quad 2 years ago. My preparation wasn't ideal. I'd had a big week already, and really I only decided to tag along with Phil Villeneuve on his attempt, the day before. As a result, my already fatigued legs weren't up to this pretty brutal day. I completed the first two summits, Grotto and Lady Mac, then dropped half way up EEOR. Phil completed the round in easily the fastest known time (FKT) to date. For those who don't know the details of the enchainment, here are the details:

To complete the quad, you must summit Grotto Mountain (2706m), Lady MacDonald (2605m), the East End of Rundle (EEOR - 2571m) and Ha Ling peak (2408m) in one continuous effort, running or hiking the whole way. Apparently it's only been completed a handful of times. Phil Villeneuve's time of 11h 02m is by far the fastest link-up to date. Lots of people have attempted the route, and failed; I also know of attempts that have utilized car or bicycle transport between trailheads. For me, the true Quad, is a pure run/hike, and must start and finish in the same place.

Anyone who has visited Canmore has seen these peaks, as they dominate the town. Apart from Grotto, I have summited all of the peaks many times. Grotto is a real grunt, and the least attractive of all the trails, and my only time on top was during the previous attempt.

This year, I was determined to have a crack at Phil's record. 2 years earlier, we had spent around a half hour sitting around eating lunch, so I knew a faster time was possible, with good planning and support.

The day started early at 6:30am. The weather forecast was great, and I hoped to bag the first couple of summits before it got too hot. I felt well rested. I am in my final prep for the Leadville 100 trail run in Colorado mid August, so I have never felt more prepared.

Due to recent flooding, the trail access to Grotto was a little more complex than usual, and I messed around a little to find the right trail, but eventually I found myself on familiar terrain and began the grunt up the incredibly steep and loose switchbacks on Grotto. I settled in for a steady, fast hike. It's easy to go too fast early on, so I purposely held back the pace some. Once you get above tree-line the route eases and the ridge to the summit is a fantastic journey, with technical running, sections of easy scrambling, and fantastic vistas in all directions. It's a shame the approach is so difficult, as this is a beautiful stretch of terrain. I hit the summit in 1h 53m, ahead of schedule, took a quick snap, then headed back along the ridge. The descent down Grotto is just as heinous as the climb, and I was very glad of my poles (Black Diamond Ultra poles) to spare the knees and quads. Soon I was racing along the Alpine club trails to the Cougar Creek crossing, where after a quick dip in the cool waters, I was heading off up the second climb of the day, Mt. Lady MacDonald.

Lady MacDonald is a pretty innocuous summit when viewed from Canmore, but when you hit the final approach to the summit it becomes a knife edge ridge, with airy and precarious scrambling needed. It looks so tame from town, it's hard to imagine what it is like unless you've been there. In one spot I had one leg either side of the ridge, it was so narrow. Fortunately, the winds were light and the rock bone dry; I wasn't being blown off like Phil, during his attempt. I ditched my poles for the final summit approach and was able to dash along the ridge without mishap. 4h 22m had elapsed as i hit the top. I was feeling great, and happy to have ticked off the two hardest peaks in good time. I was conservative on the descent, knowing what was ahead, but was already starting to feel some quad fatigue by the time I ran into town and headed up Spray Lakes road.

My wife Saira and my sons, George and Albert had driven to the bottom of the Spray Lakes road where I spent around 15 mins refuelling. I downed 2 cokes, ate as much food as I could stomach, and packed my pack for the next leg. I was travelling purposely light, using the Ultimate Direction AK race vest, with 2 bottles up front. For the first 2 peaks I had also carried an extra litre in a bladder, but for peak 3, EEOR, I decided to ditch the bladder. I figured 2 bottles were enough. By the time I had trudged to the EEOR trailhead, however, 5km up an incredibly dusty Spray Lakes road, I had almost finished one bottle. This wasn't good, and the realisation that I was going to run dry, during the hottest climb of the day, started to weigh heavily on me. I know this climb well, and there is a section of relentless loose scree, half way to the top. As I reached it, I was slowing significantly, and realizing I had to ration my water, and how far I still had to go, I ground to a halt. I sat down on some blisteringly hot white limestone and began to contemplate dropping again. This was exactly the spot where I had ditched my previous attempt.

Reluctantly I dialled my wife, to arrange a pick up:

"Hey, Saira, I'm dropping out. I'm done. The desire to finish this thing has gone. Can you pick me up?"

"Look, I don't think I can finish this. I'm just exhausted. And I think Phil's record is out of the question"

"Why don't you forget about the record? Hike up slowly and at least get Rundle done. Take it easy for a while. I'm not going to tell you to give up. You really wanted to complete this. Do you really want to have to go through this again?"

It was a good point. I had said an hour earlier, that if I failed, there'd be no more attempts. I'm not one for dropping. I remember once at a pit stop in an eight hour mountain bike race being told to "...get up and get back on your bike. You are teaching your kids that it's OK to quit, and it's not!"

OK, time to get moving again, I thought.

I got moving again, and it seemed like the brief break had revived my legs some. Then a couple of hikers with huge packs came down the trail. I asked them if they could spare some water. They had litres between them and were almost at the end of their hike. I filled both bottles to the brim, and with a new sense of determination I got moving again. By now the calories from lunch were kicking in,  and before I knew it I was scrambling through the final exposed rock bands to the summit of EEOR. I texted Saira:

The time elapsed was 7h 57m. One summit to go, the easiest. I ran strongly off EEOR and soon hit the Spray road again, where Saira was waiting with fresh supplies. This was a fast pit stop, and within a couple of minutes I was jogging through the woody lower trails of Ha Ling peak.

Ha Ling seemed to fly by in a blur. The trail was incredibly busy with hikers and runners. I spoke with a few who asked me what I was up to. One couple remarked that they had seen me running through town several hours earlier. They couldn't believe the enormity of the run, or the stupidity, I guess. I paused on my poles, a couple of hundred feet below the summit to catch my breath. i was working at max effort and must have looked like death. An older hiker, encouraged me:

"Don't worry lad, the hardest is over, you'll be on the top in under 45 minutes"

7 minutes later I summited. The climb had taken around 52 minutes, a decent time, given the distance in my legs already. 9h 37m had passed since I'd started, and I knew that barring mishap I could run down to town in around an hour from the summit. I realized that the FKT was definitely possible.

The run down was a haze. Saira met me coming down the final few hundred metres to the trailhead. "I'm good now," I shouted. "I think I can get the record!"

I ditched the poles at the car, and sped off down the dusty Spray road. By now I was energized and realized that not only was I going to finish, but I was probably going to beat Phil's time.

The descent went without mishap, and I met my two children in the final km. They ran the last bit with me, and we put in a decent 5min 10s final kilometre back to our home. 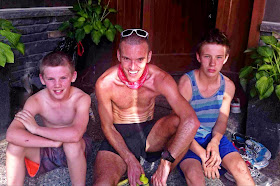 Final stats from my Suunto Ambit: 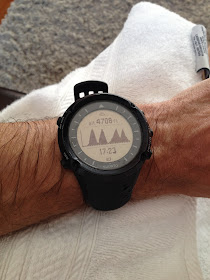 Shoes - Hoka One One Bondi Bs (a road shoe but great on the trails too)
Socks - Injinji (not a single blister all day)
Shorts - LuLuLemon
Poles - Black Diamond Ultra poles (indispensible - the fact that I was running 2 days later pain free, is a testament to these poles)
Pack - UD AK race vest (super light and comfortable)
Jacket - Patagonia Houdini
Food & Drink - H20, coke, Honey Stinger gels - around 12, plus 'real food' at pre-arranged stops. Thanks to John Firth for the top up mid way up the Spray climb!

Saira, George, Albert - awesome inspiration and support. Saira, especially, for talking me into getting my sorry ass going again on EEOR. Thanks to the couple who refilled my dwindling water supply on EEOR.
Also thanks to Compressport Canada, for the awesome compression wear that has helped my recovery.

Here's the link to my GPS data: