I recently got into trail ultramarathon running. I have previously been an avid biker and adventure racer, but lately the lure of the trail ultra has grabbed me in a big way.

In July I finished the 150km Sinister 7 ultramarathon in the Crowsnest Pass area of British Columbia. I jotted down a few notes a week after this race, as I was licking my proverbial wounds.

150km is a long way. But it was not as hard as I thought. 2 years ago this would have seemed like an impossible distance. Train hard, run regularly, and get as much advice from other runners as possible.

Bad spells are temporary. In the 2 races I've done over 100km, I've had a 10km awful spell in each. It does get better. I keep reading this Winston Churchill quote, which I don't know is accurate, but goes basically like this :
"if you're going through hell, keep going"

A good sentiment in ultras.

Train on hills. I think that this is the best advice I can give. Mile for mile, running in the mountains cannot be beaten. Good support in races is priceless. My wife had an absolute nightmare at Sinister 7 with flat tires, a flat car battery, multiple jump starts and managing 2 dogs and 2 kids. I don't think she mentioned any of this gong show at my transitions, or if she did I don't remember! Great food was ready, they got me in and out quickly with what I needed. My kids were always a few hundred metres up the trail before feeds and ran in with me. This was a huge morale booster. 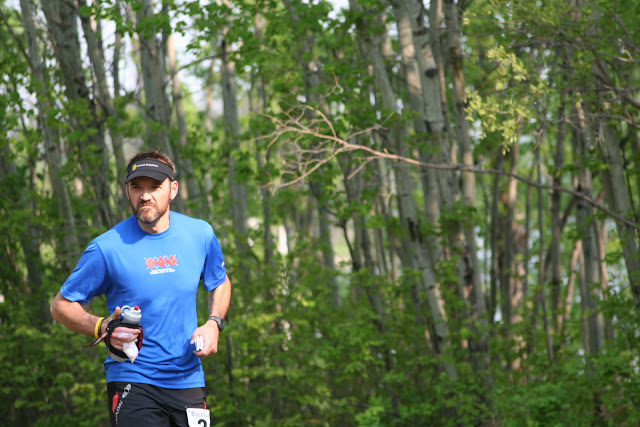 75km into my first trail 100km - the Blackfoot Ultra


Gear - get it sorted before race day. You need to trust your system, and be confident in your gear. I like back packs at the moment and the Salomon ones do the job great.

Food. Mmm, tricky one. Eat lots early on. I don't think I've nailed this one yet. I've had some nausea and cramps mid race and I suspect it's gel related.

iPod. No - enjoy the chit chat and scenery.

Caffeine. Rocks late on. I had coffee and red bull in the later transitions, along with salty soups. Starbucks Via works great in transition areas.

Enjoy the scenery, after all, it's supposed to be fun.

Pace off other racers if no official pacer is allowed. I paced off a couple of other racers for miles. Both ultimately dropped out, but they got me through a quarter of the race. If the pace is perfect, why not.

Get in the zone! I get totally absorbed in the moment. People asked me what I thought about in an 18 hour trail race. Pretty much absolutely nothing, and to me, that's part of the attraction! No worries, no hastle, no big stresses; just get to the next feed zone!

(this post originally appeared on Google+)
Posted by Unknown at 8:24 PM